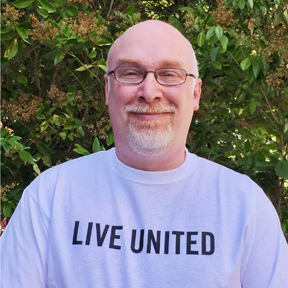 The following is a paper written by Paul Larsen for his MPA class at The Evergreen State College. Besides being a Geoduck, Paul is an Air Force Veteran and Director of Volunteer Programs at the United Way of Thurston County.

I spoke with Jim Cooper, Olympia City Council member and CEO of United Ways of the Pacific Northwest, the trade association for local United Way organizations in Washington, Oregon, and Idaho.  I have known Jim since he was the Executive Director of Together, a local nonprofit that serves to advance the needs of our communities’ youth.  On November 14th, I attended Jim’s 41st birthday party, where he announced that he is running for Thurston County Commissioner, District 1.

I met with Jim on Tuesday, April 12th, to speak to him about his sources of inspiration and direction in public service/leadership.  When asked, as a community leader, what is his source of inspiration, Jim answered, “His daughter and his wife and that the world is going to be a better place for his daughter growing up.”  Jim’s personal mission is people and the environment.  He believes “the role of government is to navigate the interface between the built and the natural environment.”

Before his daughter, his motivations were the kids he worked with.  In Denver, Jim was working with homeless youth services.  There were kids that were kicked out of their homes because of their sexual identity.  Jim and the people he worked with were able to support those kids and be there for them when no one else would.

I asked Jim if he has other leaders that he looks up to or that he models.  Jim’s first answer was his dad.  His dad was an elected official and his scout master.  The other person was his wrestling coach, Mike Hess.  Mike set a tone for Jim that “you get what you get in life based on how hard you work.”  Both of his role models used the “Servant Leadership” model style: “Leading by example and showing people how to do it, versus an authoritative leader.”

Jim said that a friend of his taught him this quote: “Leadership is a behavior, not a position. What you do affects the world around you; therefore, you are a leader.”  Jim said that, “Leadership is putting yourself in the right place at the right time with your skills and experience to take charge of the situation.”

When asked what advice Jim would give to future leaders, his answer was one single word: “Listen”.  As an elected official, Jim spends time trying to get things from people.  Jim said it is easier to get what he wants when he finds space to let them talk.  They want the space to speak about what is important to them.  By listening first, you help to build that relationship that makes everything else easier.

I asked Jim how he works with other leaders. He said, “It can be hard sometimes, because everyone has their own thing. They are pushing hard, and typically, they know they are right, regardless of where they are coming from.”  Jim said, “It is about, again, the listening and understanding where the other person is coming from.”  He said that the biggest thing he has learned since being on the city council is that once the council makes a decision, even if everyone is not in agreement, that the council must work as a team and support the team decision, even if you might have disagreed in the beginning.

Jim Cooper’s advice to future leaders is to “listen”.  I believe Jim’s advice corresponds with the MPA Mission Statement.  In order to advocate powerfully for the public, you must first listen to the public.  Jim’s work with the Olympia City Council also aligns with the MPA Mission Statement.  Council members must think critically, communicate effectively, and work collaboratively.  Jim has done all of those very effectively during his two terms on the Olympia City Council.  I believe Jim will continue to use those skills when he is elected this November as the newest Thurston County Commissioner.